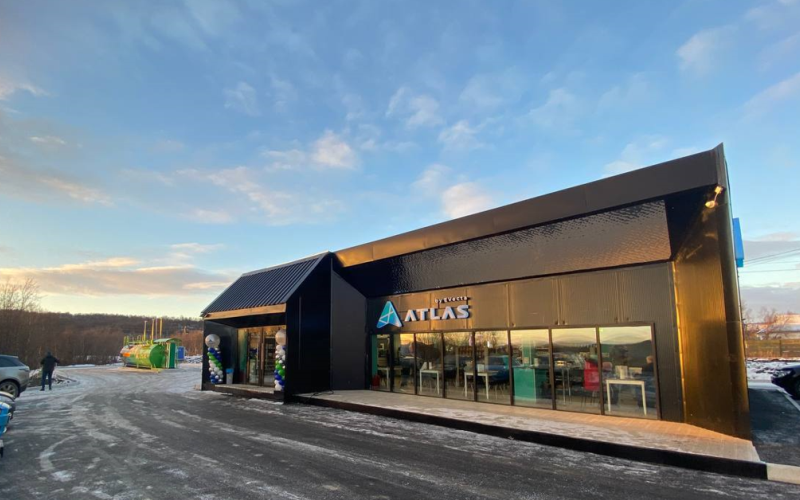 A multifunctional roadside service complex has been opened on 1517 km of the federal highway R-21 "Cola" near the village of Pechenga in the Murmansk region. A unique facility for the north of Russia, built under the conditions of the preferential regime of the Arctic Zone of the Russian Federation (AZRF), provides a wide range of services for road travelers. The Atlas service complex has both a regular gas station and a fast charging station for cars, an Arctic cuisine cafe and a shop, and car wash and parking services, tire repair and free wheel swap will also be available in the future. According to the agreement with the Far East and Arctic Development Corporation (KRDV), investments in the project amounted to 27 million rubles.

"You can come to us in the evening of the weekend to sit at a table in the hall with panoramic windows or on the outdoor terrace with picturesque views of the mountains. This, perhaps, was the main idea of the project – to create such conditions for travelers so that they could fully and with pleasure relax while on the road," says Maxim Kukushkin, Managing Director of the Ivekta Group company.

The prerequisite for the implementation of the project was the absence of gas stations in the village of Pechenga and its neighboring settlements.

"Earlier there was a gas station in Pechenga. The most common, without any services: they just poured fuel on it. Then it was liquidated," says Maxim Kukushkin. – We decided to build a multifunctional complex in approximately the same place where the old Pechenga gas station used to be. But not in the village itself, but next to it, so that the services of the service center could be conveniently used by both residents of Pechenga and other road travelers."

The project was launched after winning the competition of interest–free loans of ANO "Center "Second School" (founders - the administration of the Pechenga municipal District and the company "Norilsk Nickel"). In the future, the support for entrepreneurs was the receipt by the company "Ivekta Group" of the status of a resident of the Russian Arctic – along with all the benefits.

"We started working on the project a year and a half ago. First of all, we turned to the Murmansk architectural bureau "Center for Urban Development", agreed that we want to see a modern, "light" building in the Scandinavian style. Then construction began, parking equipment, installation of a "smart gas station" and an electric charging station," says Maxim Kukushkin.

One of the main "highlights" of the complex is a cafe with Arctic cuisine: dishes of venison, fish, berries, mushrooms, seafood.
For the Ivekta Group company, the opening of the complex in Pechenga is not the end, but only the first stage of the project. Thus, Ivekta Group, together with the Murmansk Region Development Corporation, has started creating another roadside complex ATLAS, which will be located in Lovozera.

"The project of creating a roadside complex in the Pechenga district was accompanied by the Murmansk Region Development Corporation, starting from the moment of searching for a land plot for construction. The new complex in Lovozero will be built jointly with equal financial participation. The project has already received the status of a resident of the Russian Arctic," said Svetlana Panfilova, General Director of the Murmansk Region Development Corporation.

"The AZRF regime has provided an opportunity to implement an investment project with the support of the state to almost any entrepreneur in the Arctic. The minimum amount of investments is 1 million rubles. At the same time, zero property, land and profit taxes are available to investors of the world's largest preferential territory for 5 years, 75% of insurance premiums for newly created jobs are subsidized for 10 years, until 2032 it is possible to receive a tax deduction of up to 50% of the calculated mineral extraction tax for solid minerals for new deposits. In addition, a resident of the Russian Arctic can get land for a new enterprise, apply the procedure of a free customs zone. We provide comprehensive support for each project, together with regional development institutions we provide a full range of services and services of the KRDV, - said Vladimir Gudkov, Director of the Department of support for the implementation of investment projects of the AZRF KRDV. – Thanks to state support tools, 45 new enterprises have already been launched in the Arctic. These are projects in the fields of logistics, services, tourism, medicine, as well as mining, construction and manufacturing companies, catering enterprises. More than 480 projects are at various stages of implementation. Residents of the Russian Arctic have actually invested 56 billion rubles in their projects, created more than 4.4 thousand jobs."