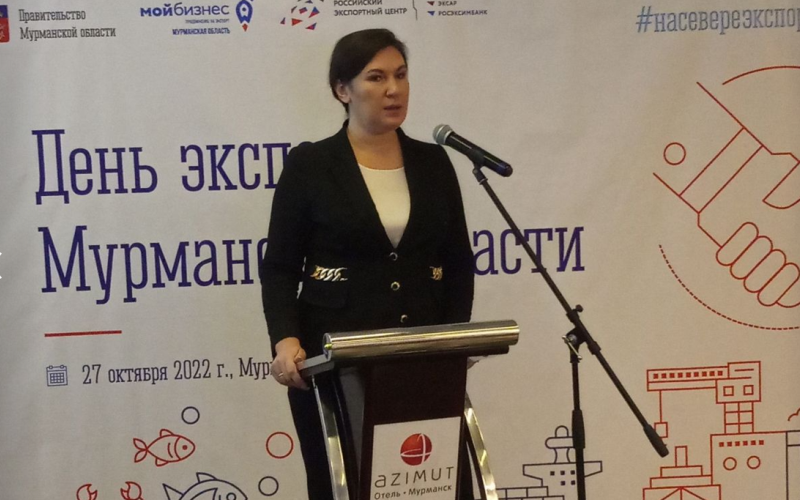 The Export Day of the Murmansk Region brought together more than 100 representatives of the business community, federal and regional authorities, and experts.
The forum participants discussed measures to support exports in the face of sanctions pressure, regional experience in supporting participants in foreign economic activity.
Particular attention was paid to building new logistics routes in conditions of restrictions, finding suppliers in alternative markets, the specifics of working in Asian and Middle Eastern markets, as well as the prospects for exporting agricultural products.
A separate round table was devoted to one of the most popular topics – trading through electronic trading platforms, during which invited experts presented prospects and opportunities for Murmansk entrepreneurs to enter foreign marketplaces.

"The economy of the Murmansk region is highly stable. Despite the sanctions pressure, the region has shown a high ability to adapt to new conditions and has maintained stability. According to the results of 8 months of 2022, the region demonstrated growth in industrial production, investments, cargo handling volumes by seaports and terminals," Olga Kuznetsova, Deputy Governor of the Murmansk Region, stressed in her welcoming speech.

Among the regions of the North-Western District, according to the results of foreign trade activity in the first half of 2022, the Murmansk Region ranks fourth in terms of exports. The contribution of small and medium-sized enterprises to the total volume of regional exports amounted to more than 6 percent.

The geography of foreign trade of enterprises and organizations of the Murmansk region includes 62 countries.

"The Regional Export Support Center, established in 2019, supports small and medium-sized enterprises to enter new foreign markets. This year, small and medium–sized enterprises have signed 16 export contracts, the volume of supported exports amounted to 5.4 million US dollars," Minister of Arctic Development and Economy Tatyana Ruskova noted in the report.

With the assistance of the regional Export Support Center, polar companies participate in international exhibitions in Turkey, India, Brazil, and Belarus.  Business missions were conducted to the United Arab Emirates and the Republic of Belarus, reverse business missions from Armenia and Turkey.

In 2022, more than 35 million rubles are provided for the support of export-oriented enterprises.

An exhibition was held at the forum site, where more than 10 small and medium-sized exporting enterprises working in various fields were represented.

For example, the company "Green House" demonstrated samples of wooden windows made of natural materials, the companies "Visit Murmansk" and "Khibiny for you" presented tourist services on the Kola Peninsula, and the company "Arctic" – its own production of boats, presenting one of them as an exhibitor in front of the business center "Arctic".

The forum was held in order to facilitate the implementation of the tasks of the national project "International Cooperation and export", including assistance to regional exporters in the development of trade relations, localization of foreign partners in Russia, as well as the creation and development of new contact platforms between enterprises in the region and familiarization with current measures to support exporters.

/ Ministry of Arctic Development and Economy of the Murmansk region /