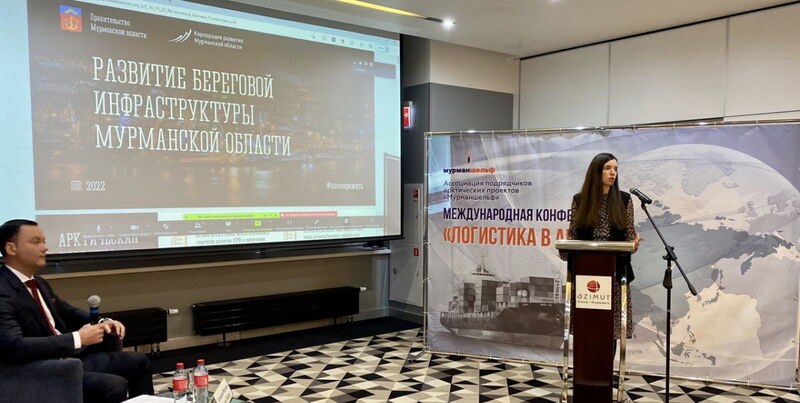 The new logistics along the Northern Sea Route was discussed at the traditional international conference "Logistics in the Arctic" in Murmansk On November 16, 2022, the 12th international conference "Logistics in the Arctic" was held in Murmansk, organized by the Association of Contractors "Murmanshelf" with the support of the Government of the Murmansk region and relevant ministries. The key topics of the conference are maritime logistics in modern realities, the growth potential of cargo traffic on the routes of the Northern sea route; development of coastal infrastructure in the Arctic; services for maritime logistics; routing in the conditions of a new normality, measures to support enterprises in the Russian Arctic.

"It is already strategically correct to develop the Northern Sea Route not only exclusively in the interests of exporting natural resources extracted in the Arctic zone of Russia, but also for international transit sea transportation, including container transportation," said Tatiana Ruskova.

The conference participants paid special attention to the development of investment projects of coastal infrastructure in the Arctic under the conditions of sanctions pressure. Already today, the volume of investments in logistics and transport projects of the Murmansk Region aimed at the development of the Northern Sea Route is about 170 billion rubles. And the decision of Russian companies to rebuild logistics in favor of the northern transport corridor leaves no doubt about the need to build up high-quality coastal infrastructure, according to the government of the Murmansk region.

"It should be noted that in the new realities, companies are effectively building new logistics. For example, the company "Antey" sent a frozen crab to the Far East in the summer in connection with the launch of subsidized coastal transportation along the Northern Sea Route. And now seven vessels on the NSR are completing the delivery of live crab to Asian countries. Colleagues get a unique experience that will be valuable in the future for all industry participants,” said Svetlana Panfilova, General Director of the Murmansk Region Development Corporation.

In addition, for the first time, a Supplier's Day was held within the framework of the conference with the support of Gazprom Neft PJSC and the Institute of Oil and Gas Technological Initiatives. The conference was also attended by a delegation of industrial enterprises of the Chelyabinsk region.