Andrey Chibis: there are no borders for the development of the North 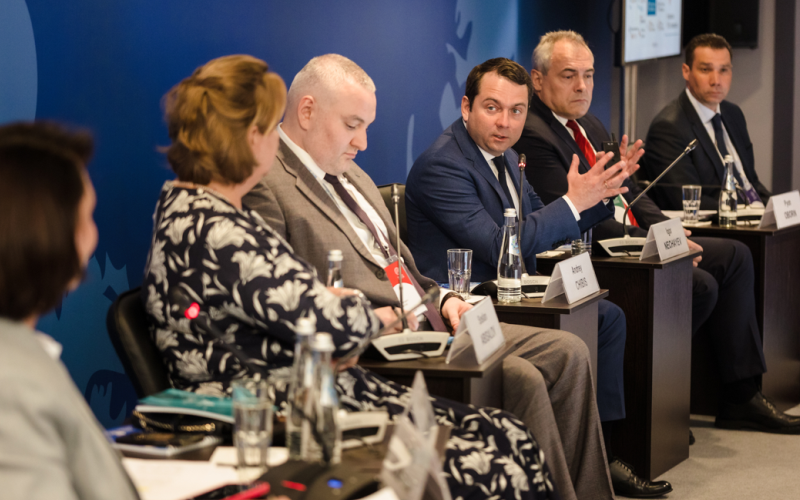 The first championship of professional skills in northern professions has started in Murmansk today. Governor Andrey Chibis spoke at the most important event of the business program – the plenary session "Personnel for the new economy of the Arctic zone".

"It is a great honor for us to host the first championship in Murmansk, the capital of the Arctic. The Arctic regions are actively developing today. The training of highly qualified personnel is extremely important. Technologies and projects are changing. But changes are impossible without people," the head of the region noted in his opening speech.

The Governor stressed that in recent years the country's leadership has been paying special attention and support to the Arctic regions. Thanks to this, the Murmansk region has achieved a high level of economic development. Andrey Chibis noted that this indicator affects a person's choice: whether to stay to study, work and live in the region. The governor said that thanks to the decisions taken, even during the pandemic, the work of large industrial enterprises and construction sites did not stop. In addition, the dynamics of the development of the Murmansk region exceeds the average Russian indicators. The economy grew by 16% and investments by 30%. Industrial production in the region increased by 17.3%.

"By the end of 2021, the Murmansk Region has ceased to be a subsidized region. Houses and roads are being repaired, settlements are being improved. There is not a single city in the region where there would not be changes. After all, in addition to jobs, it is necessary to create a comfortable environment for a person. And today, thanks to economic growth, the Murmansk Region can invest in the quality of life," the governor stressed.

The head of the region noted that there are no borders for the development of the North. The Murmansk Region is the leader in the number of residents of the Russian Arctic and by applications among the participants of the Hectare of the Arctic program. A number of large–scale projects are being implemented in the region, among them the creation of a high-tech center for the construction of large-capacity offshore structures of NOVATEK, the Lavna Commercial Seaport, and the White metallurgy plant.

"These projects will create 20 thousand jobs. But specialists must meet the implemented quality standards, so career guidance in the region begins with school, industry classes are created. The child has a sufficient amount of data to make decisions," the governor said.

So, there are classes with career guidance in schools: Phosagro class, NOVATEK class, Atomclass, Rosneft class, logistics class, cadet class, Gazprom class and 2 Yandex sites.Lyceum.
The Arctic schools project is also being implemented in the region. This year the program includes kindergartens. Modern workshops are being created in colleges. There are 18 of them in the region now, 12 are being created this year, and 19 more will appear by the end of 2024. Colleges are assigned to key partners of the region. Among them: NOVATEK, Norilsk Nickel, Phosagro, EuroChem, Rosatom. The project of the Kovdorsky Educational and production Center is being implemented within the framework of the "Professionalism" program. In addition, a course has been taken to restart and transform MSTU. Among the partners of the university are the leading enterprises of the region.

Young talented Northerners are supported in the Kola Arctic. In the Murmansk region, there is an Olympus award of 100 thousand rubles and a nominal scholarship of the governor of 37 thousand rubles. The region has also created a grant program for socially significant youth initiatives aimed at developing the volunteer movement. In addition, an award will be established in the Murmansk Region for the winners and prize-winners of the All-Russian Olympiad of Schoolchildren. The winners will receive a one–time payment of 200 thousand rubles, the prize-winners - 150 thousand rubles, as well as teachers-mentors. Those students who won in the 2021-2022 academic year will also receive support.

In addition, the governor announced the introduction of an additional regional scholarship for excellent students of colleges and technical schools. Already in the fall, almost 500 students will start receiving 10 thousand rubles a month.

Chairman of the Board of Directors of EuroChem Igor Nechaev noted the work of the governor's team and stressed that the Murmansk Region is among the top five. Today, an investment contract was signed between the regional government and the company on the implementation of the Kovdorsky GOK development project for the next 10 years.

"We have to train new, modern, young personnel on the spot. Investments will create all the most necessary conditions: new equipment and modern technologies," he said.

Peter Oborin, CEO of NOVATEK-Murmansk LLC, noted that since 2021, with the company's participation, a specialized technological profile class based on grades 10-11 has been opened at school No. 36 in Murmansk, and in 2020, support was provided to the Murmansk State Technical University.

Ruslan Ilyasov, Deputy General Director, Director of the HR and Social Policy Department of JSC Kola MMC, stressed that the company needs highly qualified personnel. At the same time, he noted that specialists need to be nurtured in the region.

Eduard Bobritsky, Director of the Personnel Management Department of JSC "USC", expressed hope for cooperation with the Murmansk Region in the field of shipbuilding and mechanical engineering within the framework of the "Professionalism" program.

The Arctic is the most important part of the Russian Federation. It develops quickly and cannot be stopped. 547 projects have become residents of the Russian Arctic. The total volume of investments is approaching 1.5 trillion. This was announced by the director of the Department for the Development of the Arctic Zone of the Russian Federation and the implementation of infrastructure projects Soslan Abisalov.  The speaker also outlined the goal – to create 200 thousand new jobs in the Arctic zone by 2035.

Yulia Hanzhina, Deputy Director of the Young Professionals direction of the Agency for Strategic Initiatives for the Promotion of New Projects, noted that in modern conditions, the development of the Arctic is impossible without understanding a large-scale task: not only to transform the territory for themselves and their needs, but also to preserve a unique region. The speaker stressed that ASI, together with the ecosystem, supports projects in the field of education and training for the implementation of high-tech, infrastructure projects, the emergence of new competencies.

In conclusion, the head of the region thanked everyone who invests in the economic and social life of the region.

Recall that from August 10 to 14, in accordance with the Plan of main events in connection with the chairmanship of the Russian Federation in the Arctic Council in 2021-2023, the first championship of professional skills in northern professions is being held in Murmansk. The organizers of the event are the Ministry of the Russian Federation for the Development of the Far East and the Arctic, the Government of the Murmansk Region, the Roscongress Foundation and the Skills and Professions Development Agency.